Royal Mail and Parcelforce are more than a household name. They operate in 44 countries around the world employing almost 160,000 people, delivering more than 14.0 billion letters and 1.8 billion parcels every year.

Specialising in connecting companies, customers and communities across the country, Royal Mail Group is committed to delivering a 'one-price-goes-anywhere', universal postal service to more than 30 million addresses across the UK.

As a leading UK company, Royal Mail Group are undertaking one of the biggest industrial transformations in the UK in recent history. Letter volumes are declining. So, as a company Royal Mail Group are focused on leveraging the increasing number of parcels being driven by the growth of the online shopping industry, especially at peak retail times.

As one of the oldest organisations in the world, Royal Mail Group can trace its origins back over 500 years to 1516.

Royal Mail and its forerunner organisations are responsible for a number of global firsts, ranging from the Penny Black stamp to the world's first 'one-price-goes-anywhere' Universal Service.

That proud tradition of innovation continues today as new technology and digital service are introduced and services are expanded at home and abroad.

Henry VII knights Brian Tuke, the first Master of the Posts. Tuke establishes key post towns across the country and builds a formal postal network. Although for the next 119 years the postal service operates only for the King and the Court.

The postal service is opened up to the general public by Charles I. A Letter Office is established in London and six post roads are formalised to carry mail across the country.

The Post Office Act creates the publicly owned postal service. A year later, the world’s first postmark is used. It’s called the Bishop mark after the Postmaster General, Henry Bishop. It shows the date of dispatch and is designed to give confidence in the speed and reliability of the mail.

The Post Office Act paves the way for a unified postal service across Scotland, England and Wales. Ireland follows in 1808.

The name Royal Mail is given to the service when mail coaches become a familiar sight across the country.

Steam-driven packet ships are introduced to deliver mail across the British Empire and the Commonwealth.

Uniform postage rates are introduced, replacing a complicated, confusing and expensive system of tariffs. For the first time, the sender pays the postage instead of the recipient.

The world’s first adhesive postal stamp, the Penny Black, is launched. Queen Victoria appears on the stamp and 68 million are used in the first year. As the inventor of the postage stamp, the UK is the only country in the world that doesn’t have its name on its stamps.The introduction of the Penny Post leads to a great increase in the popularity of mail. Mail volumes rise from 67 million in 1839 to 242 million by 1844. They jump to more than 1 billion letters a year by 1875.

Post-boxes are introduced to the British mainland, following a trial on the Channel Islands the previous year. They are green to start with and feature the insignia of the monarch at the time.

Parcel Post is launched, reflecting a need for personal and business customers to send more than just a letter. The growth in parcel deliveries sees the title ‘Letter Carrier’ replaced with the more familiar ‘Postman’.

The Association of Post Office Women Clerks is founded. It’s the first association in the UK civil service to represent female clerical workers.

The first motor vehicle enters the postal service. The two-and-half tonne lorry covers 300,000 miles in its 18 years of service.

The world’s first scheduled airmail service begins, as part of the celebrations of the Coronation of George V. British aviation pioneer Gustav Hamel flew from the London Aerodome in Hendon to the Postmaster General's office in Windsor.

Postcodes are introduced in a trial in Norwich. They are rolled out nationally from 1965-1974, giving a postcode to every British address. Postcodes allow mail to be sorted automatically by machine. The combination of letters and numbers allows for over 48 million unique combinations, making it one of the most precise postcode systems in the world.

Queen Elizabeth II approves Arnold Machin’s design of her to be used on postage stamps. Her Majesty’s image has since appeared on more than 180 billion copies of the stamps.

First and Second Class letter services are introduced – the first in the world.

The British Telecommunications Act splits the General Post Office into two separate organisations – postal and telecoms. This ends the Post Office’s control of the national telephone service which it took over in 1912.

The Post Office is organised into three separate businesses – Royal Mail Letters, Parcels, and Counters. The Parcels business forms the foundations of Parcelforce.

Online postage launches, allowing the general public to pay for, download and print their own stamps.

Moya Greene is appointed as CEO of Royal Mail Group Ltd. She is the first woman to lead Royal Mail in its 500-year history.

Royal Mail celebrates the London 2012 Olympics by issuing 29 stamps celebrating Team GB’s Gold Medal winning athletes. The stamps are issued the day after the win and available to buy in Post Offices by lunchtime. Another 34 stamps are issued for Gold Medals won in the Paralympics, the first time that a host country issues stamps to celebrate Paralympics gold medallists. Royal Mail also paints over 90 post boxes gold to celebrate our athletes’ success in both games.

Royal Mail purchases 100 plug-in electric vans for their UK fleet, deployed to Delivery Offices around the UK. Nine electric heavy goods vehicles have also been commissioned for testing at the Mount Pleasant Mail Centre in London.

Browse and apply for the latest jobs with Royal Mail. 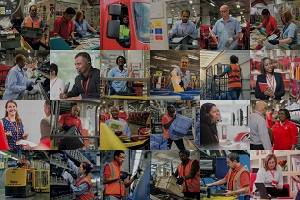 What skills do you need to work with Royal Mail