Browse and apply for the latest kitchen porter jobs.

James has only recently started working as a kitchen porter. Here’s his story.

What do you like about working as a kitchen porter?

Though being a kitchen porter is hard work, it’s flexible and I love the banter we have in kitchens. I also have a steady routine, so even when the chefs are shouting at each other about misplaced broccoli or whatever, I can just get on with my job, chat to people and lose myself in my own thoughts. It’s strangely therapeutic at times.

What happens in a typical day working as a kitchen porter?

As a kitchen porter, you do a lot of washing up. Whether you’re using a machine or by hand, sometimes both, you’re going to be spending a lot of time making sure the restaurant has enough clean plates, pans and cutlery to keep things running smoothly.

I also occasionally prepare basic foods, such as salads and sandwiches, though that’s only when the chefs are busy and I’ve got a spare moment. And when deliveries come in, I’m usually the one to put everything away.

What qualities would you say make a great kitchen porter?

The most important thing is that you need to be a hard worker. Being a kitchen porter isn’t an easy job. It’s tough, especially when it’s busy. I also take pride in standards — everything should be sparkling once I’m done with it.

I’d also say that it’s important to have good communication skills. Chefs aren’t always the easiest to work with, especially when they’re under pressure, so being able to judge how to speak to them and when is really important -- especially if you want work to be fun.

What are the biggest challenges you face in a typical week at work?

In a kitchen with a dishwasher, learning that it’s broken is one of the worst feelings ever. You know you’re in for a tough day. Being on your feet all day, especially in a hot environment, isn’t the best place to be either.

During busy shifts, I can often be overloaded too which is stressful. But you always go home thinking you’ve contributed something, which is more than I can say for the retail jobs I’ve done in the past.

Often, the hours can be fairly unsociable, though this does depend on where you work. Generally, you’ll be among the last people to leave as you’ve got to clear up making sure all the equipment is clean and ready for the next day. This can also be the best part of the shift, we have a lot of laughs especially when there’s a few of us all mucking in to get the job done. If you work in colleges and universities the hours are better from what I’ve heard from friends, though I personally prefer the buzz of a restaurant kitchen. Working evening service works better for me too.

What types of establishments do you tend to work at e.g. hotels, restaurants, gastropubs or other?

I’ve only worked in restaurants so far, but I’ve not worked as a kitchen porter for too long. I know friends who work in hotels and they seem to like it.

What advice would you give to someone trying to get into your line of work?

Make sure you have good shoes! You’re going to be on your feet all day so you don’t want to be turning up to work in uncomfortable footwear. In terms of the job itself, stick at it, settle down and don’t be afraid to make suggestions on how things can be improved. You also need to be polite, helpful and reliable to build good relationships with the other kitchen staff. You might get a bit of stick at first, but trust me, it’s only kitchen banter, and you’ll soon be joining in.

Why have you chosen to work as a temp in this line of work?

It’s an easy way to pick up extra work, especially if you’re doing another job on the side. Being a temp pretty much guarantees me hours as and when I need them, I don’t need to be stuck forever in the same place. It’s also a good stepping stone getting to know different kitchens and how they work.

For me, this work started as a part-time gig, but it’s now made me want to become a chef. I’m slowly learning on the job even though most of the time I’m just washing the dishes.

Browse and apply for the latest kitchen porter jobs. 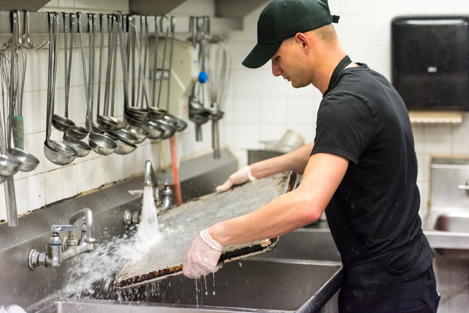 How to become a Kitchen Porter?

No commercial kitchen can run without a good kitchen porter. Find out all you need to know about being a Kitchen Porter,