Browse and apply for the latest bartender jobs.

Stephen has been working as a bartender for the past four years. Here’s his story.

What do you like about working as a bartender?

Everything. When people come to bars, they’re there to have a good time, so there’s always a positive buzz about the place.

Socially, it’s great too. You get to work with some really amazing people and also hear customer’s stories. If you’re a social person, this job is amazing.

It’s often a very fast-paced job and shifts often fly by. Also, in the place I’m working at the minute, I’m learning so much about craft beers, wines and stuff. It’s stopped me drinking cheap lager when I go out, that’s for sure.

What happens in a typical day working as a bartender?

Obviously, the main part of the job is pouring and serving drinks. What you serve depends on where you work. If you’re in a cocktail bar as a mixologist, you’re preparing drinks that can take almost a minute with a lot of ingredients. Alternatively, if you’re working in a bar at a football stadium, you’re essentially just pouring pint after pint of lager. It all depends.

Wherever you work, you’ll also have to stock up to make sure the fridges are full. We do this at the start of the day and as the shift goes on. You’d be surprised at how quickly the stock disappears, especially on a weekend. Then there’s the social aspect. Half the time we’re acting as an agony aunt to our customers’ lives. Seriously, the stories you hear. It’s fascinating.

What qualities would you say makes a great bartender?

You need to be a very sociable person, and you need good communication skills. You’re here to make people’s visit to the bar as positive as possible, so you need to be able to make people feel great -- even if they’ve just been sacked or found out their relative has died, which happens more often than you think. A bar is where almost everyone goes when they’ve just had some bad news.

You need to be confident and hardworking as well. Working behind a bar, you might think it’s easy pulling pints for hours on end. But it’s often stressful, especially on busy shifts. Making sure you don’t mess up is essential, as you don’t wanna ruin the shift for everyone else. Oh, and this isn’t the same for every job, but if you’re in a cocktail or craft beer place, you need to know your stuff. People expect it when they walk in, so you need to know about the products, what they taste like, where they’ve been brewed, etc.

What are the biggest challenges you face in a typical week at work?

Speak to anyone who works behind the bar, and they’ll always give the same answer: rude customers. We’ve all got our horror stories, but to be honest, they don’t happen that often. You just need to make sure that you don’t rise to their rudeness. Keep smiling and they’ll eventually stop being unreasonable. Drunk people can also be a problem. We’ve all been there, but it can be annoying when you’re sober and people are chanting at the bar.

Things can often go wrong as well. Beer taps stop working properly, the gas runs out. These things always pop up. But if you’re organised as a team, you can get through it. If you’re working in a football stadium, it’s hard to hear what people are saying. If your hearing is sensitive then I wouldn’t advise working those sorts of events.

It really depends. In my bar, nearly all of us are doing at least a couple of night shifts a week. It’s a rarity not to, unless, of course, you’re working at events like Ascot or a music festival. But in a standard pub, working full-time, you’re working upwards of 40 hours a week and you’re on your feet the entire time. It can be tiring, but it’s almost like going out every night. How many jobs could you say that about? Yes, you finish late, but I think it’s 100% worth it.

What types of establishments do you tend to work at e.g. hotels, gastropubs or other?

I’ve worked in quite a few places. I’ve done pubs, cocktail bars, restaurants, football stadiums, hotels -- the lot. There are a lot of different places you can work as a bartender, so you can almost pick which one fits your personality. I personally prefer pubs, cocktail bars and hotel work because you can actually speak to customers and get to know them. Events are usually way busier and you can feel like a machine. Though not working on a night probably works better for some people.

What advice would you give to someone trying to get into your line of work?

Be ready to learn. You might think it’s just pouring pints but you need to be smart, confident and good at listening to the people who know their stuff. Learn where everything is before you start your first shift, learn the products, and don’t take ages doing small tasks because it will annoy both the people you’re working with and the customers.

I’d also say be yourself, have fun and enjoy the experience. This is one of the few jobs going where your personality sets the tone of the environment and how enjoyable people feel drinking in your company. You can actually have fun and earn money at the same time. Obviously, don’t go too far, but if people are there to have a good time, they expect you to have a good time, too!

Why have you chosen to work as a temp in this line of work?

The main reason is I’m a really sociable person and I like meeting new people. Because I’m changing where I work all the time, I get to speak to new people every day who have some incredible stories to tell. I think if I worked full-time I might get bored of seeing the same faces.

It also allows me to fit my work around my personal life, which is great. So many people start bartending when they’re students, and half of them keep doing it after too. It’s a job you either love or you don’t.

Browse and apply for the latest bartender jobs. 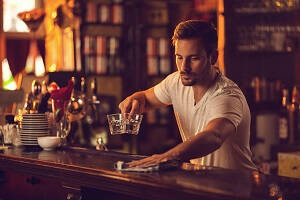 How to become a Bartender?

If you enjoy following recipes to the letter or love to let your creative juices flow by adding your own flair to a drink you should consider a job as a bartender. Find out more here.