Meaning is the new money, when it comes to increasing productivity, motivation and employee retention. 9/10 people would chose a job role that provides more meaningful work according to recent Harvard Business Review report.  Across all age and salary groups, people are willing to pay a significant amount to find meaning.

This is not a statistical outlier. In a study undertaken by author and TED speaker Shawn Achor, nearly 80% of respondents would rather have a boss who cared about them finding meaning and success in work than receive a 20% pay increase.

Similarly, in the paper ‘Accepting Lower Salaries for Meaningful Work’, the authors noted that:

All of these statistics remained stable even when controlling for demographic factors and differences in job characteristics. Regardless of job type, meaning matters - not only for employees but for businesses, too.

Businesses benefit by providing employees with work that has meaning

Employees who say they have ‘very meaningful’ work spend an additional hour a week working - equivalent to a 2.5% increase in productivity. They also take, on average, two fewer days paid leave each year - a further productivity boost of 1%.

Based on established job satisfaction-to-productivity ratios, HBR report that ‘highly meaningful work will generate an additional $9,078 (£7,500) per worker, per year versus workers who experience an average degree of meaning’. The average salary in the UK is £29,009. Not only are employees willing to take a 23% pay cut to find meaningful work, but the resultant productivity gains are equivalent to a 26% pay rise for every single worker.

Additional business value comes in the form of increased retention rates. Employees who find work highly meaningful are 69% less likely to plan on quitting their jobs within the next six months and have job tenures that are 7.4 months longer on average than employees who find work lacking in meaning.

Likewise, research by Penna echoed these findings, summarising that: ‘organisations that devote resources towards creating meaning at work can anticipate increased motivation (55%), loyalty (42%), pride (32%) and productivity (20%).

Though the benefits of meaningful work are significant for both workers and businesses, organisations are falling short in providing it. Strangely, business executives know this. When asked how much more productive they are at their peak versus ‘on-average’, the most common answer from executives is a fivefold increase. However, most executives report they are ‘in the zone’ less than 10% of the time. What’s more, when those same executives detail the bottlenecks in achieving peak performance, more than 90% point to aspects centred on meaning.

This gap presents both a challenge and opportunity for businesses. In today’s hyper-competitive talent market, candidates can choose where they want to work and demand what they want from work - including meaning. If talented workers aren’t offered roles with meaning, it’s easy (and often preferable) for them to jump ship.

For businesses to attract and retain talent and improve productivity, they need to build greater meaning. Meaning can no longer be a minor consideration - it needs to be a business imperative. 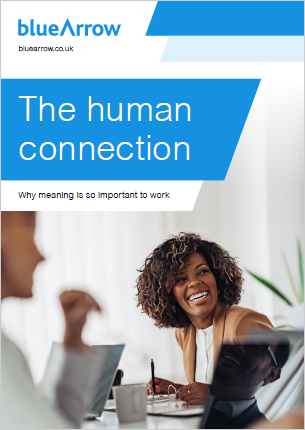 This post is part of our full whitepaper called "The Human Connection" read more about this and get practical tips on how to generate more meaning at work.

Pay Rate Report
What is the link between happiness and productivity?
Share Location