Restaurants. They’re such an ever-present part of modern life that it’s easy to forget they’re a relatively recent invention. Indeed, the term “restaurant” actually originates from 18th-century France, making them a more recent creation than other cultural meeting places like coffee shops and alehouses.

Ever since the birth of eateries in the ancient world, the way we eat out has evolved alongside technology and changing social customs. In some cases, restaurants have even been drivers of innovation themselves.

Rapid technological progress since the mid-20th century has made modern fast-food joints and fine dining restaurants almost unrecognisable from their original 18th-century Parisian counterparts. And with the advent of the digital dining experience, there’s more history yet to be written.

Join us on a trip through time as we explore the fascinating history of restaurant equipment — from Stone-Age stoves to touch-free ordering.

From Ancient Rome to the Middle Ages: the first eateries 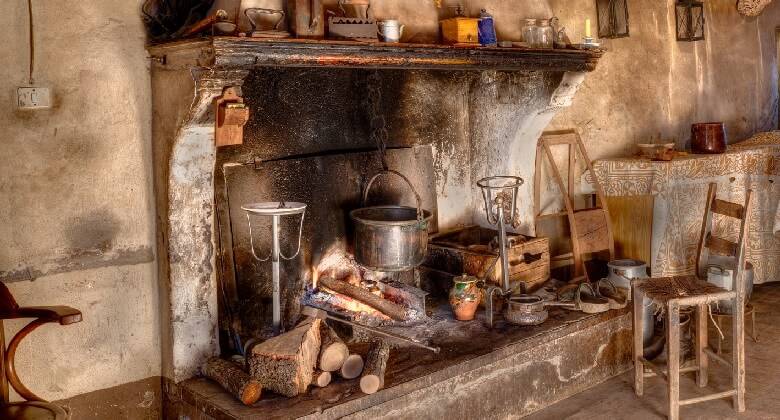 Since the dawn of civilisation, there have always been places to eat in public. But it wasn’t until Classical Antiquity that establishments resembling restaurants started to appear in large numbers.

In the cities of the Greco-Roman world, public eateries called thermopolia (literally meaning “a place where something hot is sold”) offered food and drink for passers-by. Though open to everyone, these eateries were demonised by the elites because most visitors were poor and did not have the luxury of a kitchen in their own homes.[1]

Themopolia typically had L-shaped counters where it was possible to buy ready-to-eat food that used to be stored in earthenware jars. Cooks in a thermopolium made use of Roman kitchen utensils such as meat hooks, meat mincers, spatulas, colanders, strainers, iron ladles, as well as pots and kettles made of bronze and terracotta.[2]  Prehistoric items like pestles and mortars, bowls, and various types of knife were also used to prepare dishes.

Fast forward a millennium to Song dynasty China (960-1279) and we can also find something similar to restaurants. Food service establishments resembling tea houses were common in the empire’s capital, Kaifeng, and these gradually blossomed into a fully-developed food industry that catered to local people and travellers from all over the country.[3]  By the late 13th century, demand was so high that customers were able to order a range of cuisines from written menus.[4] Cast-iron stoves were used to cook food, and common ingredients included beef, venison, horse, fowl, rabbit, vegetables, fresh fish, preserved fish, fruit, oranges and a host of traditional spices. [5]

Around the same time as this eastern culinary explosion, taverns and inns started to serve rudimentary meals to feed people travelling along the road networks of medieval Europe. Most of these eateries served the sort of food you would find in a typical peasant or merchant home — including bread, cheese, roasted meat, and broths cooked in cauldrons.[6] Unlike their Chinese equivalents, however, these establishments cannot be considered restaurants because there were no menus. Everything served was down to the whim of the chef.

But what about the equipment used? Typical utensils included frying pans, pepper mills, slotted spoons, tongs, mallets and even waffle irons.[7] Weighing scales, rolling pins, roasting forks and cheese graters were also tools used by these culinary pioneers.[8] As we can see, the kitchens of the Middle Ages were surprisingly advanced.

18th-century Paris and the birth of the restaurant 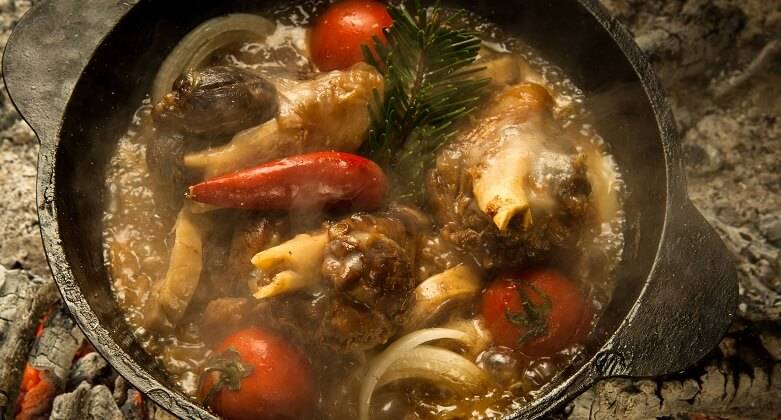 The modern restaurant as we know it was born in 18th-century France, where the term “restaurant” initially meant an invigorating broth made of meat and egg.[9]As the dish became more common, the name became applied to Parisian establishments that sold broths such as bouillon.

According to legend, a character named Monsieur Boulanger was the person to open an establishment that sold restorative broths in 1765. He even supposedly used the term “restaurant” on the sign hung on his door.[10] Following on from Boulanger’s lead, similar establishments serving food for working-class Parisians continued to spring up across the city.

Though visitors to these early restaurants were mostly members of the lower classes, a revolution in dining habits was about to begin. In 1782, Antoine Beauvilliers opened arguably the first luxury restaurant aimed at the wealthy upper classes, starting a trend that would continue into the next century.[11]

Though the French Revolution would briefly derail the upper class’s appetite for dining out, wealthy clients had sampled a taste of the eating habits of the future — and they were ready for a second serving.

The 19th century: the rise of modern restaurants 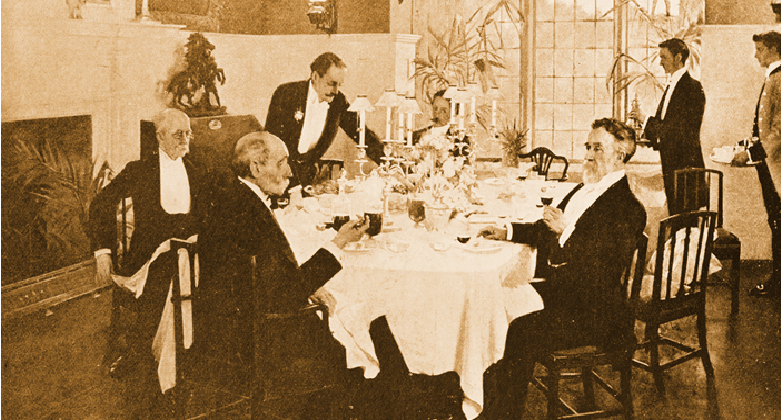 After the defeat of Napoléon in 1815, affluent diners began to flock to the French capital to sample the unique atmosphere and fashionable gourmet food.[12]At the same time, out-of-work chefs started opening their own hotels and restaurants in Paris and beyond — creating a diverse industry that catered to a broad range of people.[13]

The rapid industrialisation of Europe created a new population of urban workers who needed somewhere to eat during their lunch break. Meanwhile, a growing middle class had more time (and money) on their hands to indulge in the latest tastes. For the upper classes, dining out at restaurants in the evening became associated with leisure, family time and romance.

With increasing demand to eat out, the menu options and square footage of restaurant-like establishments continued to grow all over Europe and North America. Communal canteens sprung up in industrial cities, while increasingly ornate hotel restaurants catered to wealthy patrons seeking culinary escapism. The modern restaurant — in its many forms — was beginning to emerge.

Around the same time, kitchen equipment and supplies started to become more specialised. Items such as apple corers, corkscrews and can openers (after the introduction of canned food) became commonplace in eateries, giving chefs the means to expand the number of good food options for customers.[14]And with the expansion of European empires, restaurants served a smorgasbord of exotic new ingredients from all over the world.

The increase in mass-produced goods caused a rise in the number of utensils used in restaurant kitchens. Items like potato peelers, salad spinners and jelly moulds all became commonplace — giving chefs the ability to diversify their range of dishes for the evolving tastes of the newly-emerging social classes.[15]

Other culinary innovations in the 19th century include gas cooking, refrigeration, and the invention of mass-manufactured consumer products, from chocolate bars to whole grain cereal.[16]

In the 1890s, exclusive restaurants were established in brand-new hotels like the Hôtel Ritz in Paris and the Waldorf Astoria Hotel in New York. [17] Within the space of just over a century, the idea of restaurants had transformed: from lowly kitchens selling broth to lavish meeting places for the rich and the famous. 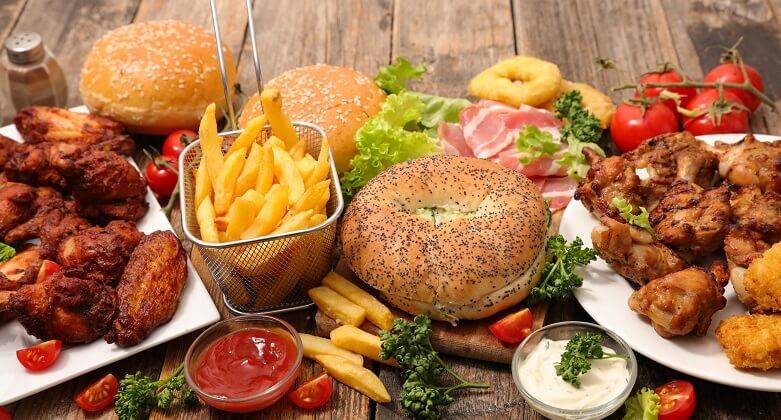 Though it’s hard to wrap up the history of restaurant equipment in the 20th century in bitesize chunks, we’ll do our best to summarise this whirlwind of an era.

By the early 20th century, copper utensils had started to fall out of favour because they reacted with acidic foods. Sturdier materials such as tinned or enamelled iron and steel, tin, silver, nickel and aluminium were commonly used for kitchen utensils.[18]  These more durable metals enabled the development of products such as toasters and blenders — both of which became commercially available in the first decades of the century.

These weren’t the only changes to restaurant equipment. In 1947, the first commercially available microwave oven was put on the market — starting an age-old debate that has divided chefs ever since.[20] Secondly, the invention of mass-produced plastic products (such as polyethylene cling film and polycarbonate boxes) provided restaurants with cheap, sturdy equipment for storing and preparing food. Finally, widespread improvements in farming, shipping and logistics gave restaurants an unprecedented number of food products to work with.

These rapid advancements in kitchen technology directly gave rise to another revolution in culinary history: the birth of high-volume drive-ins in the United States. These diners would become an icon of 1950s America, developing into fast-food and chain restaurants that served affordable and popular food like hamburgers and french fries.[21] A growing middle-class and booming economy led to more people eating out, and the restaurant industry became one of the nation’s biggest employers.[22]

The efficient service model of these restaurants would have a huge effect on the entire food industry. By standardising operations, businesses were able to optimise the whole dining experience — from supply, to cooking, to service. This model meant that fast-food restaurants like McDonald’s were able to grow at a staggering rate and become multinational giants in their own right.[23]

Towards the end of the century, the likes of McDonald's, Subway and Starbucks started to set up shop in towns and cities all over the Western world. And thanks to globalisation, these chains can now be found in almost every country on Earth. No matter if you’re in Hong Kong, Helsinki or Hull, you can buy the same meal served in the same way. 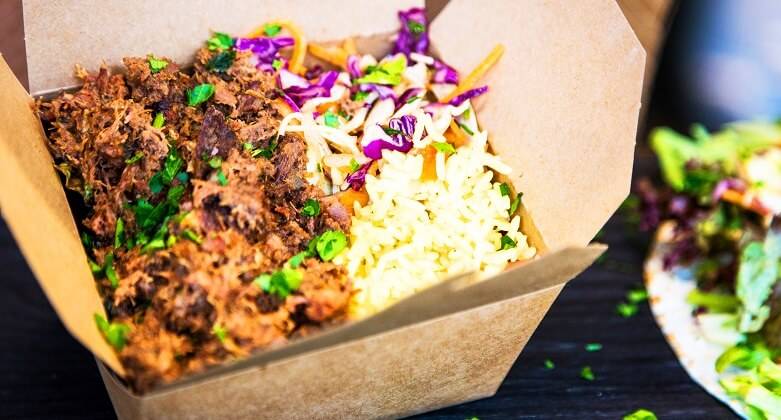 If 20th-century restaurant equipment was defined by electrics, plastics, and the standardisation of operations, the 21st century is all about the digitisation and diversification of the kitchen.

The food industry has always been a major source of innovation — and it has to be as a matter of urgency. Facing high consumer demand and an intensely competitive market, it’s important for businesses to stay on trend. That’s why restaurants are constantly exploring new ways to improve the dining experience for consumers and overcome the challenges faced by employees.

Smartphone apps such as Uber Eats and Just Eat give consumers full control over the ordering process, ushering in an integrated future where restaurants work with their customers. New tech products such as smart thermometers are giving kitchen staff a helping hand, while fully-automated kitchens are no longer a science fiction pipe dream.

Alongside equipment changes, the culinary scene has evolved from a culture of consumption and excess to one which takes its social responsibility more seriously. With an increasingly values-driven, health-conscious and hyper-connected public, restaurants are moving towards environmentally-friendly, locally-sourced produce. Even fast-food giants like McDonald’s have taken this cultural shift on board, providing healthier options and re-thinking traditional recipes.

[9] Ronald Lee, The Everything Guide to Starting and Running a Restaurant: Secrets to a Successful Business (Simon & Schuster, 2006).

How useful did you find this article?
Thank you for your feedback!
5.0 / 5.0
Back to blog listing
Share This:

Get the latest blog articles and news updates straight to your inbox.

Browse and apply for the latest jobs in catering.